Last week my daughter, who is nine, asked if I could get her a Nirvana T‑Shirt.
I know what you’re thinking and this is not that. 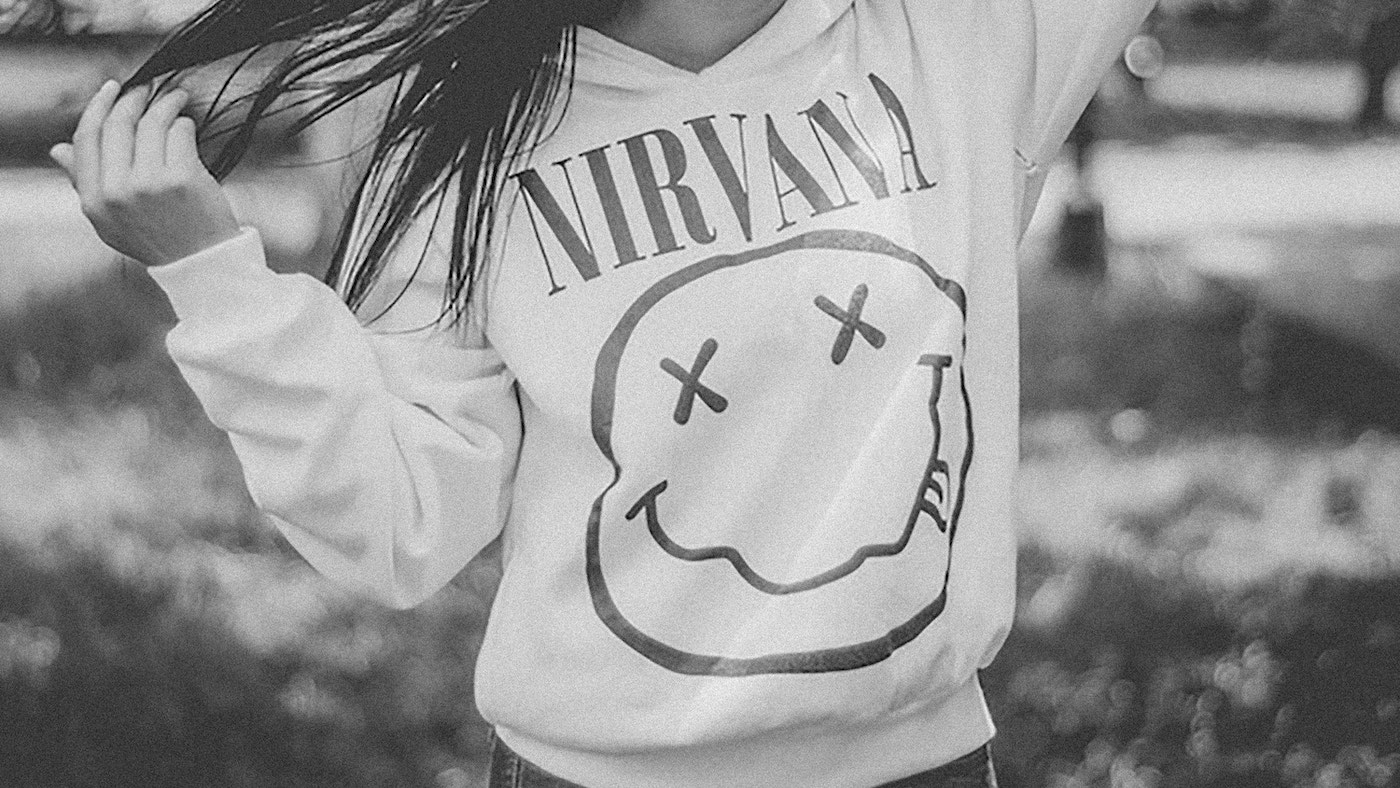 Sure I was certainly quite into Nirvana back in the day, I saw them play a few times, had a couple of gig T‑Shirts, I can name more than five songs etc. but they aren’t a band I really listen to these days and I certainly haven’t been pushing them onto Stella in that ​‘parent attempting to curate their child’s taste’ kind of way. (I gave up on that ages ago, around the Katy Perry phase)! This came entirely from her and whatever cultural influences that have been applying themselves in her sphere. 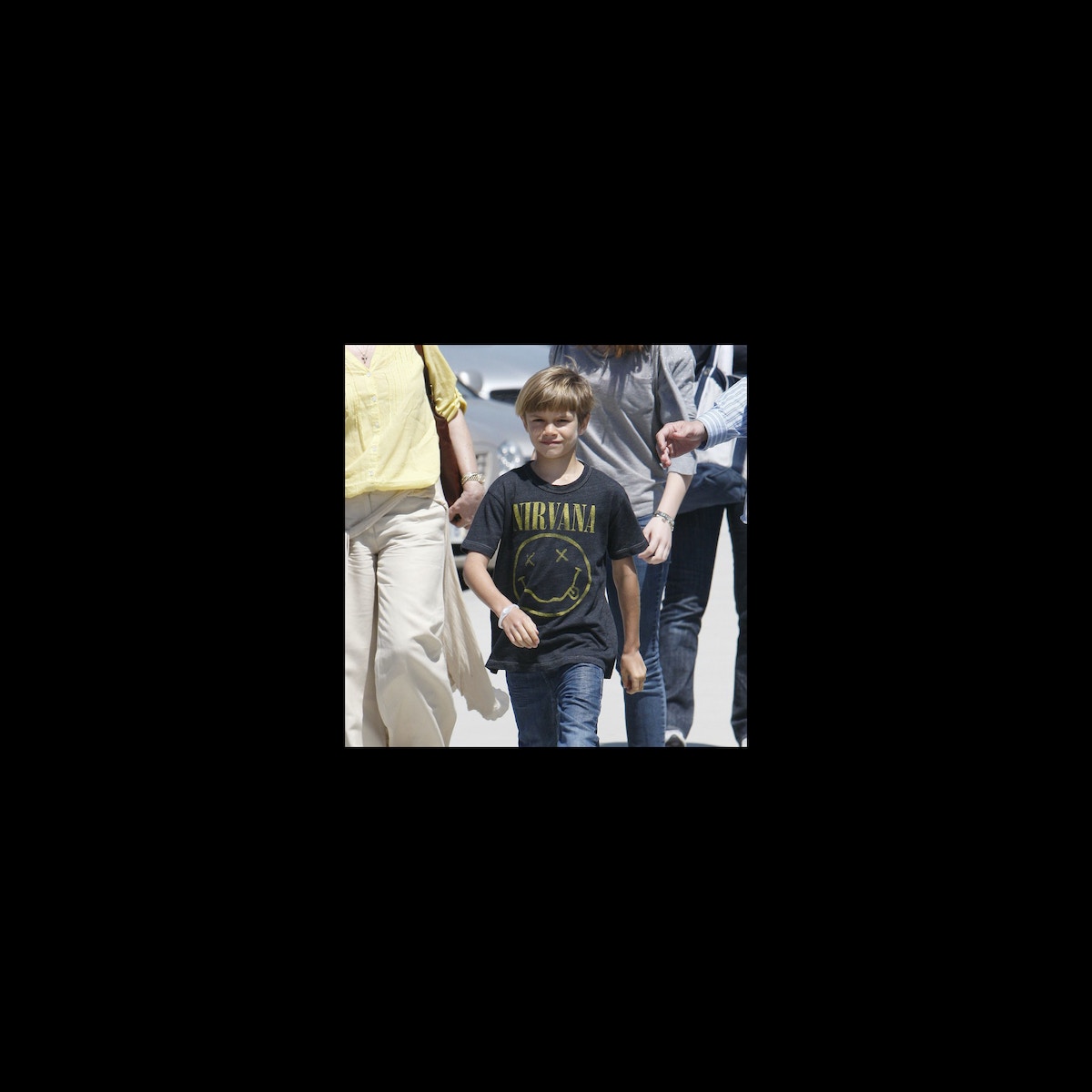 — Pretty sure this is a young Romeo Beckham, didn't know his folks were fans.

Of course the record sleeve has long been established as a vehicle for iconic imagery, the band T‑Shirt maybe less so, but these once cheap and scrappy pieces seem to have taken on a life of their own, quite detached from what they originally signified.

I wish I’d kept mine. I had shirts from Nirvana, Sonic Youth and Dinosaur Jr gigs that now appear to be worth in excess of 2k each. Back then I suppose you bought a T‑Shirt from the merch stall at the venue for a few reasons. To identify yourself as the kind of person who was into that sort of thing. To show that your were there, a proper fan perhaps. To support the band (merchandise being a key source of income) But mainly, I think, to perpetuate the moment, a souvenir of sorts. A more permanent reminder of the feelings. 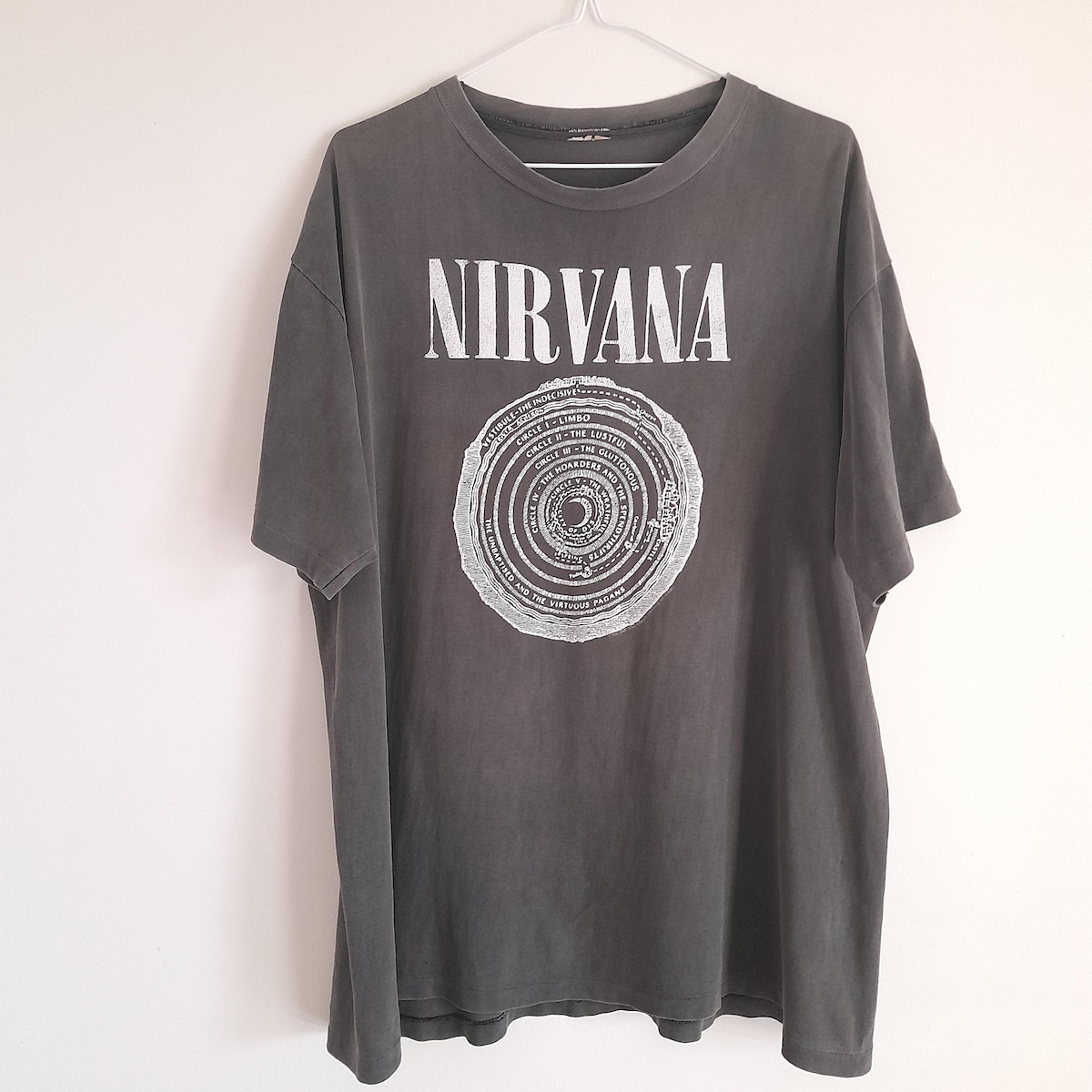 — Original Nirvana 'Vestibule' Tee. Two grand if you want one.

And I must say that even now, a good few years later I do have vivid memories of those moments. Certain songs (and images) definitely bring up the goose bumps and take me back to the sweaty mosh pits of The Leadmill or Rock City. The first time I heard some of that music.

More recently similar things happened for me in clubs with different kinds of music, but there are no T‑shirts for that.

Maybe this is one of the reasons why there is such a market for the original thing. I suspect that a lot of the people buying these 2k vintage Tee’s are middle aged folk who’ve done ok in life, have a bit of spare cash and are now feeling in some way detached from that person they used to be, they want to get back there, to reclaim something they feel they have lost along the way. Maybe that’s why there is a bit of a perfect storm around these band T‑Shirts from the 90’s, timing as much as anything (perpetuated by 6 Music). It’s a cliché isn’t it. Midlife. 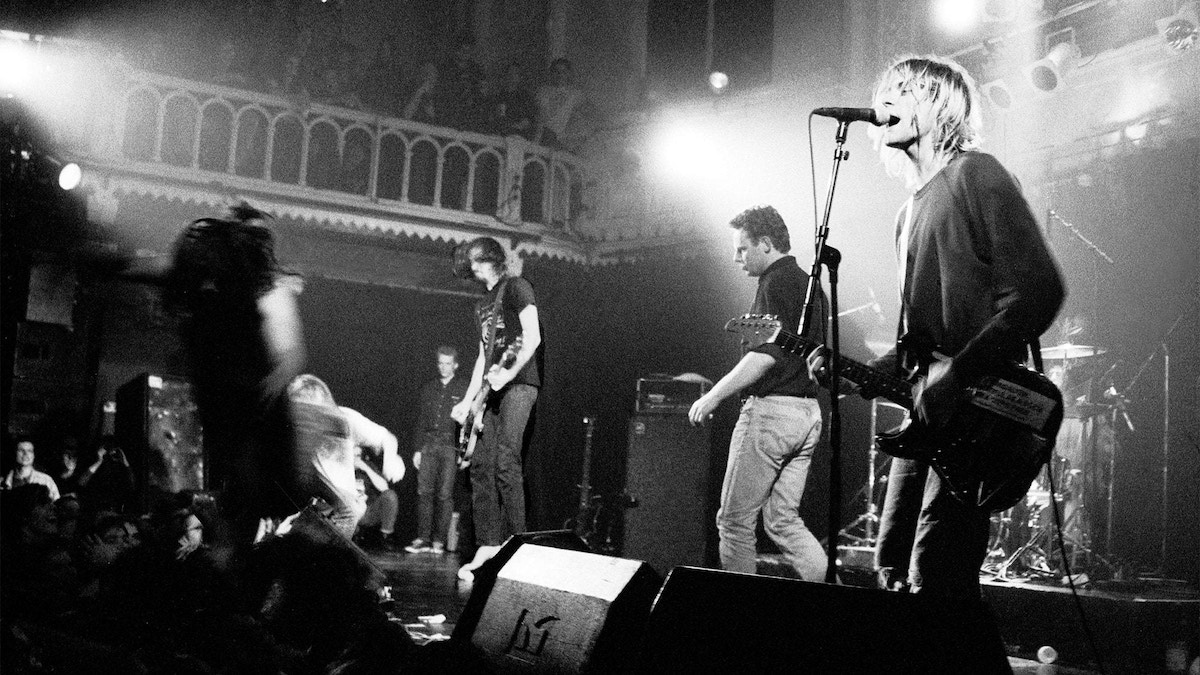 — Nirvana gig, can't find out where. Image by Peter Pakvis.

Anyway, it’s not really this that I’ve been thinking about. I’m more interested in how a few of these Tee’s have become so ​‘iconic’ that they are now almost completely separated from their context. I don’t think I’m one of these people who sees some kid in a Nirvana Tee and thinks ​‘Pah, they weren’t even born when Kurt Cobain died’ etc. I mean, I probably am a bit but I can also see that these images have an appeal way beyond the original moment. 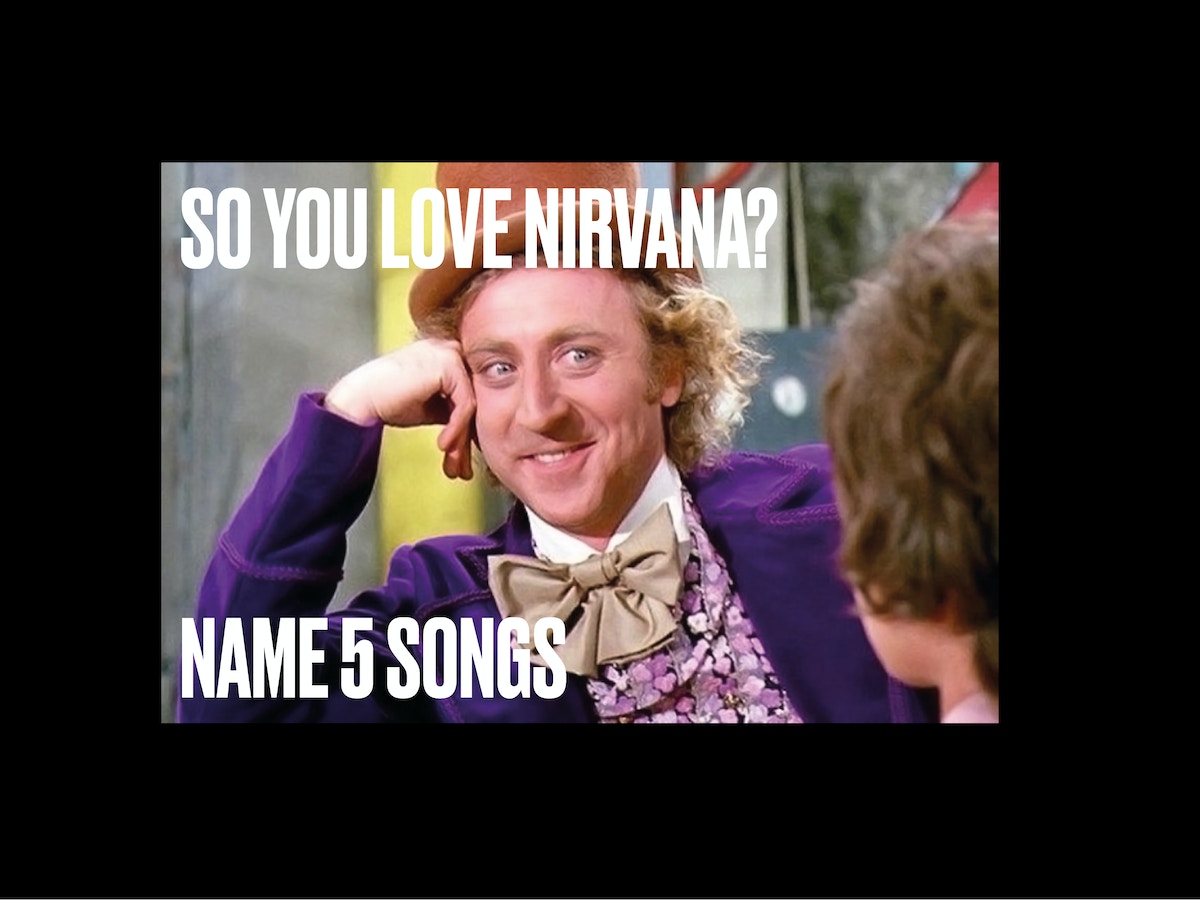 There are many examples but I think the first time I became aware of all of this was when I saw that classic Ramones Tee (the one that’s a take on the US presidential seal but with the band members names around the edge) for sale in the kids department at H&M. Stella was tiny, maybe 18 months old and I’m only slightly ashamed to say that I bought one for her. There was just something so wonderfully strange about the idea of a toddler wearing a Ramones T‑Shirt. I don’t think I really thought about it too much at the time but H&M must have bought the license to use that image. They obviously knew that there was a market for parents, like me, who would take some kind of pleasure in dressing their kids with these images that used to mean something to them. I’m a bit young for the Ramones really but even so it clearly worked.

Later I saw replica Sonic Youth ​‘Goo’ T shirts in Urban Outfitters, for something like 50 quid a pop. This felt different. These were aimed at an audience that was too young to be me but too old to me my daughter. This was fashion. The ​‘Goo’ album is probably so iconic because of its sleeve (and Tee). The design by Raymond Pettibon is based on an infamous press image of Maureen Hindley and David Smith, key witnesses in the 1966 Moors Murders trial involving serial killers Myra Hindley and Ian Brady. So where did this come from? Surely these references were lost on this audience? Surely ​‘Goo’ wasn’t an important record to them? So why would they want to buy this Tee? 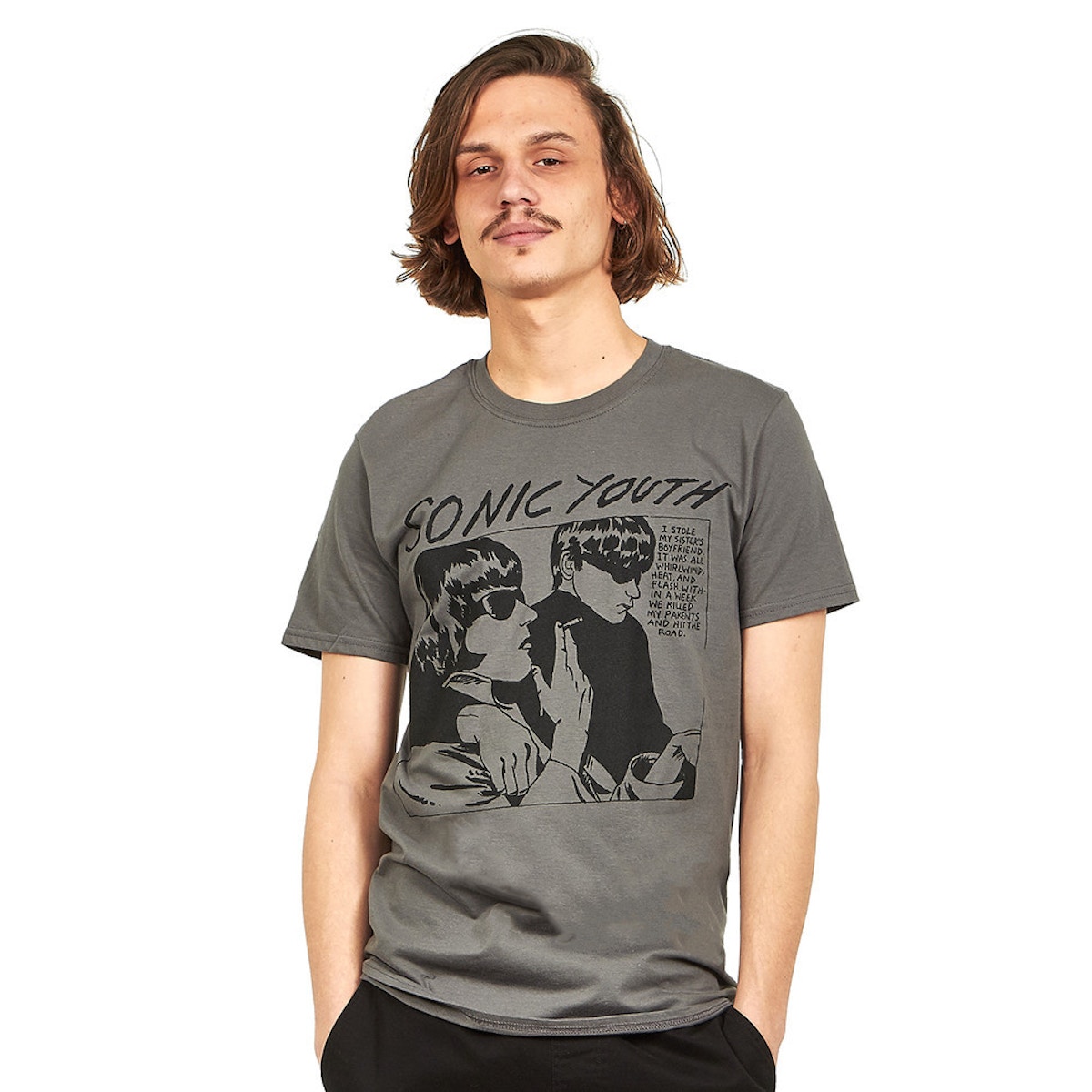 There is definitely some celebrity influence at play here, they’re all at it. I suppose in this context a band T‑shirt can help to lend a little kudos where it might be needed or to express something that doesn’t get to come out elsewhere. And of course everyone wants to wear what celebrities wear.

As a side note there was actually a change​.org petition to stop Justin Bieber from wearing Nirvana and Metallica Tee’s. Sadly it’s closed now.

Then there are the rip-offs. Again, I put my hands up here and admit that I did buy Stella the Taylor Swift ​‘Goo’ spoof Tee. There are many variations on that design but this one was particularly good. A kind of delightful, playful and stupid cultural juxtaposition. Sugary pop rubbing up against avant garde alt-rock. The yin to the yang of the Sonic (or Ciconne) Youth cover of Madonnas ​‘Into the Groove’. 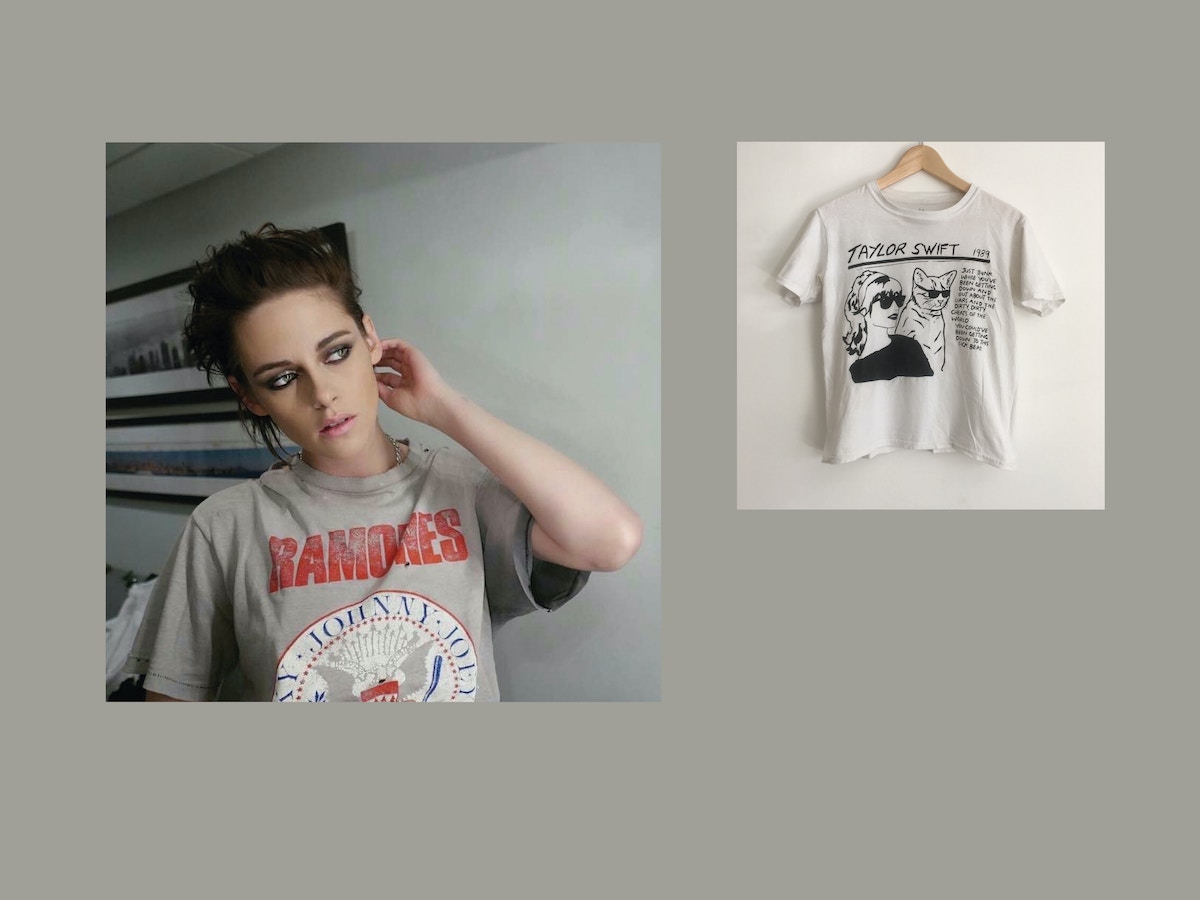 — Kristen Stewart in one of those Ramones Tee's and that Taylor Swift 'Goo' parody.

There have also been a few fairly high profile ​‘homages’ in the fashion world. Most notably the Marc Jacobs ​‘Redux Grunge’ version of the Nirvana ​‘Smiley’ Tee, apparently – or arguably – originally created by Kurt Cobain himself. Balmain also did their own version of the earlier ​‘Vestibule’ Tee depicting the 7 circles of hell.

It’s pretty clear what’s going on here, fashion borrowing from counter culture to gain an edge. It’s not the first time. But really that edge has long gone by the time Marc Jacobs does something like this. And the fact that he’s even done it certainly makes sure of that. When the image has become so detached from what it was originally conceived to represent does it even mean anything any more? 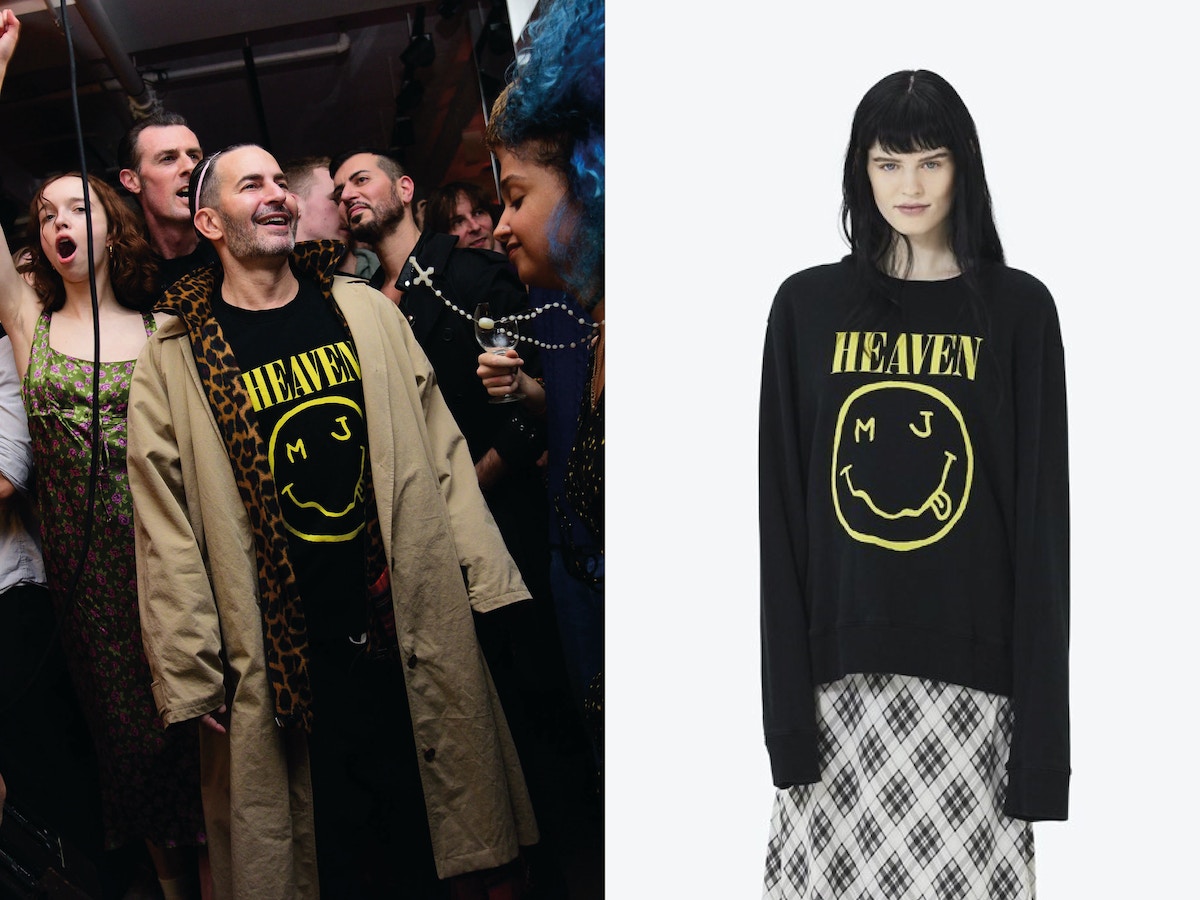 — The 'Redux Grunge' Tee from Marc Jacobs. Marc on the left enjoying his cleverness.

Music will always generate iconic imagery, and that imagery will always be appropriated by others who want to cash in on the kudos. As a designer it’s kind of great to see these images taking on a life of their own but in a way it’s also slightly heartbreaking. The intersection of design and music is one of the most fertile and creative dialogues there is, but at what point do these designs on T‑Shirts basically become logos representing a brand (not a typo) detached from their original meaning.


Or maybe that’s what’s really interesting. Nirvana is a great example. How different is a Nirvana ​‘Smiley’ T to one with a Nike tick on it? What is the Nirvana brand? Does it even exist? Well, there is no brand strategy, no marketing or PR, there hasn’t been for almost 30 years even if there was in the first place. So how is it perpetuated? 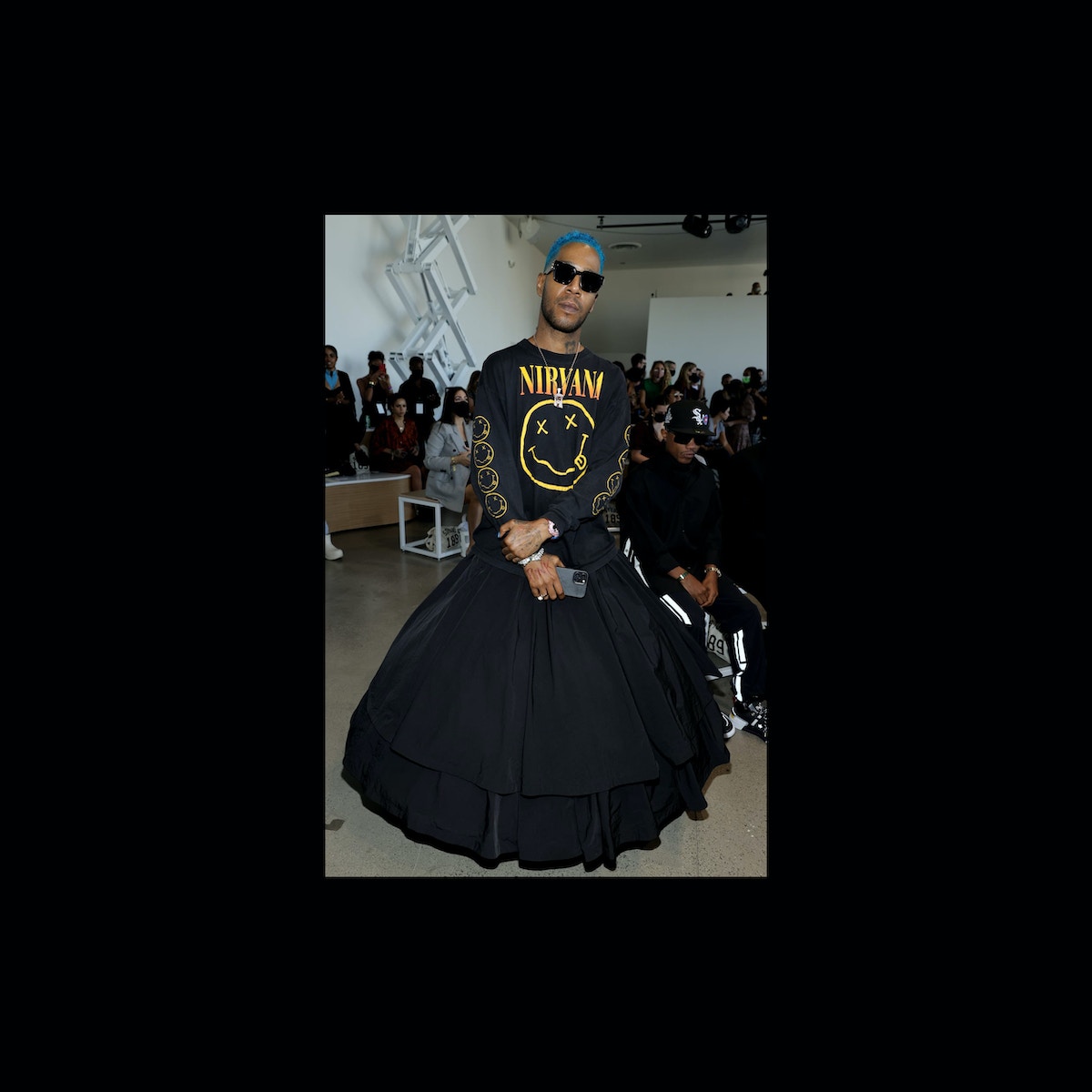 Perhaps it simply exists in the minds of the audience, created by the connections they make with the images and the music. Those connections are bound to be different now to when the image was created but they must still be powerful. Counter to the tried and tested methods of brand development it seems like this is an example of a something that has evolved and grown over time and been defined, but more importantly owned, not by people who have planned and strategised but by those that continue to give it life because of what it means to them. 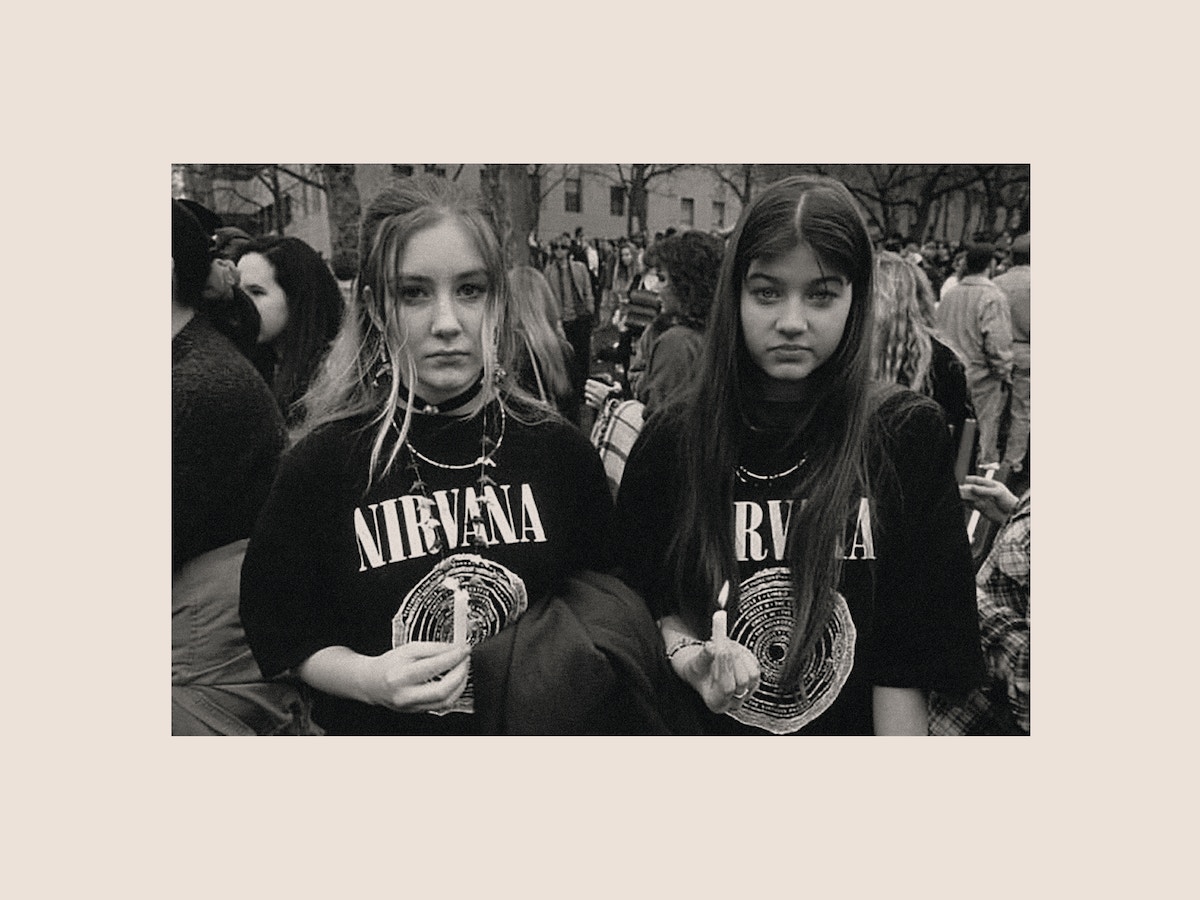 So why does my nine year old daughter want a Nirvana Tee. I don’t really know and she can’t really tell me but ​‘Smells Like Teen Spirit’ came on the radio in the car the other day and it turns out she knew the melody and a fair few of the lyrics, so maybe she’s just a fan ¯\_(ツ)_/¯